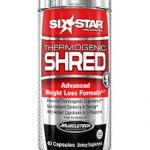 Disclaimer: This post may contain affiliate links, meaning, at no cost to you, we may receive a commission if you decide to click through and make a purchase.
Affiliate earnings help us with the cost of maintaining this website, but rest assured that if a product isn’t safe and effective – We DO NOT recommend it or include affiliate links!
Please read our Disclosure for more.

Here we have another supplement claiming to be one of the best fat burners on the market. But how effective will we deem this product when we have completed our Six Star Thermogenic Shred Review?

It has a lot to live up to since there are some very effective and safe fat burners on the market. All of these come with great reputations and some are in our top recommended fat burners article.

If Six Star Thermogenic is going to come close to getting on such a list, it will need to do the following:

On top of this traits such as dosages and staying clear of proprietary blends will be important, so just how good is this fat burner?

It claims to be an advanced weight loss formula. We’ll see how true this is but let’s get to know the people behind the product a little first. 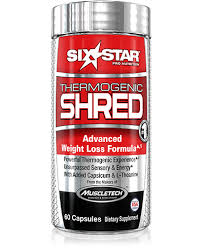 MuscleTech are the people behind this thermogenic, their products are all made in the USA to GMP standards.

Their websites main company information seems to be from the stickers it has put at the bottom of every page. This is how we know they have 20 years of excellence.

These stickers also tell us that they stay away from banned substances as well as the fact that they have won awards. Although we can’t find where they won these said awards (please leave a comment if you know).

It is clear that they are a big name in the supplements world going by the range of products they provide. With everything from this thermogenic to pre-workouts and protein bars for your workout.

They have quite a range of athletes on their roster with everything from pro athletes to YouTube stars.

This is the only place that matters when it comes to looking at this product, or any for that matter.

A fat burner is only as good at its nutrient profile, so let’s see what this one is made of.

First thing to say it is suggested that you take this twice a day. Our issue with this is that the effects are not as spread out as when you can take a supplement 3-4 times a day, which is what we prefer to see.

The way Six Star Thermogenic Shred have laid their servings out mean it’s unlikely that you will get the benefits constantly throughout the day.

A good fat burner ingredient and one that we see a lot.

The first benefit is that it will get your metabolism going, helping your body to burn fat.

The obvious benefit is the energy increase you will receive. This is especially important if you are complimenting a lower than usual calorie intake with a fat burner.

This is basically here to increase your heartbeat, the idea being that this will help you to burn fat.

You are more likely to see this in a nootropic though. It is thought to be an alternative to caffeine. Theobromine could even be better in some ways since our bodies have not yet got used to its effects like many of us have with caffeine.

It is a mood elevating compound which has its uses, but there are more effective ingredients on the market.

Yohimbine (included in some versions of this product)

We have an issue with the inclusion of Yohimbine.

If you read about it for long enough you will find it has the potential to cause side effects in the user.

This is something you won’t find with a natural fat burner. However, it is thought to be an effective fat burner.

The potential side effects that come as a result of using it include anxiety, elevated heart rate, increased blood pressure levels, tremors as well as sleep problems.

According to examine.com it works by increasing adrenaline levels in the body, as well as inhibiting a regulatory process in fat cells, which normally suppress fat burning.

It is most commonly used as an aid for erectile dysfunction and is considered to be another stimulant.

That is part of our issue with this product, it is full of them.

This is much better ingredient choice from Six Star Thermogenic Shred. Cayenne Pepper is an actual thermogenic, but needs to be dosed effectively…

This is where our body is heated up inside, causing it to burn fat to cool itself down. Who wouldn’t want an ingredient that burns fat whilst you are doing nothing?

The problem here is the 1 mg included here isn’t enough to have much of an effect Therefore, it’s a pointless inclusion. A shame for the best ingredient in the whole Six Star Thermogenic Shred Review.

This is another decent ingredient in a fat burner.

It is mainly thought to regulate the amount of fat your body puts on. However, most of these studies have been carried out on animals so far.

It would be a good ingredient for a nootropic as it is thought to increase the user’s focus and promote quality of sleep.

Another Ingredient that is most commonly found in other types of supplements such as nootropics as it is good for increasing focus, and pre-workouts.

However, there are studies that show it can be good for burning belly fat as well as increasing energy in the user. It is clearly included for a reason.

It helps your body to use the fat you have stored up as fuel, burning it off in the process, so it is a decent inclusion.

Another form of Cayenne Pepper, this is more like it when it comes to thermogenics.

A good source of fat burning this is another ingredient that makes this product live up to its name of thermogenic.

If there was a bit more varied in its ingredients profile it would be a better product.

The problem we have with this fat burner, is there are so many stimulants. This often masks the true effectiveness of a product. It makes you feel like it is having an effect when really it is just giving you a caffeine rush.

Probably why they suggest taking just twice a day, the side effects of too many stimulants include jitters, headaches and a lot more.

If you purchase Six Star Thermogenic then try to find one that does not include Yohimbine. This is another stimulant but one that can cause potential side effects that include anxiety, elevated heart rate, increased blood pressure levels, tremors as well as sleep problems as we mentioned earlier.

There is no reason to buy a product that could cause such side effects when there are many natural and completely safe fat burners out there.

It is important to start by saying that the people behind this product clearly understand what makes a good fat burner, the problem is in the delivery.

Whilst there are a handful of proven fat burning ingredients within this product, there are also some ineffective ones that are taking up space best used by better ingredients.

On top of this, the amount of stimulants alarms us. Sure a lot of supplements use them, and when they aren't the focal point of what the product is about. It can be used to great effect. With so many included in Six Star Thermogenic Shred, it seems as though they are trying to compensate a little bit here.

It is a shame not to see some of the better fat burning ingredients such as Green Tea Extract. Especially since this is thought to be one of the best thermogenics going. That's pretty much our Six Star Thermogenic Shred Review done. But...

If you want to find a fat burner that is one of the best we have seen because of its 100% natural and safe ingredients that are effective and all proven fat burning ingredients, then have a look at Instant Knockout.

This is a product that is used by professional UFC fighters such as Diego Sanchez when making weight. For a closer look at this great fat burner check out our in-depth Instant Knockout review.

Although Six Star Thermogenic Shred may work, there are far better fat burners out there.

We have compiled a list of what we consider to be the best and most effective on the market so you don't have to spend hours researching.

To see what made it onto our top 5, check out our Top Recommended Fat Burners article.

Get That Toned Bikini Body!

Professional b-boy (breakdancer) and all-round health, fitness, weightlifting, calisthenics, climbing and movement addict since childhood! Raised by health and nutrition obsessed parents, he’s keen to research and question everything. Oliver absolutely loves learning, optimizing and improving himself and his performance and has a passion for helping others to achieve the same!